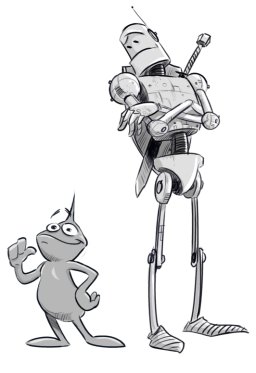 ZUTO: The Adventures of a Computer Virus

A book for computer-loving kids 9+

Throughout the book the term “bit” is mentioned to refer to the digit 0 or 1. Here’s an interactive demo explaining how bits are used to represent numbers. Also, as the book’s characters drive around the hard drive in chapter 9, the driver mentions Hexadecimal numbers. We’ll explain them here too.

Here are four different kinds of counters. Click the + and – buttons below to experiment with them.

The decimal counter should be pretty familiar. It simply shows the number of rectangles at the bottom panel in the usual fashion.

This counter too counts the number of rectangles in the bottom panel, but it shows this number in a different representation, called the a binary number, or base-2 numerals. When it shows “1 0” it doesn’t mean ten, as in the decimal counter, it means two.

Digital devices prefer to use binary numbers, since it’s easy to represent them using electrical wires, where current in a wire can be on (=1) or off (=0). When these devices display numbers on screen the usually convert them to decimal, so that humans will be able to read them more easily.

Sometimes though digital devices display numbers in hexadecimal representation, or base-16 numerals. The third counter above shows how they look like. Here every wheel has 16 digits: the usual ones, 0,1,2,3,4,5,6,7,8,9, then six more: A, B, C, D, E, F. The additional six use letter symbols, but they are still just digits. Any symbol can be used for the digits, it doesn’t matter.

The bottom panel which simply shows the number as a sequence of rectangles is called a unary counter. Using a single symbol to represent a number by simply repeating it over and over again is called the unary numeral system. It is not very convenient to use of course, since it requires a lot of writing when the numbers get large.

Next on our tour: how logic gates are used to manipulate binary numbers.

Facebook
Or visit udiprod.com for the author’s home page with animated videos